The USTGS is pleased to provide the following highlights, video and photographs from a very memorable 2nd Annual Hall of Fame Awards Ceremony & Banquet. These awards are given each year to honor Taekwondo’s finest, in order to preserve our great heritage through a recorded recognition of the contribution that men and women have offered the Taekwondo community at large over the course of its modern history. Without further ado, please enjoy the following pages as a tribute to this year’s recipients, as well as those who have assisted in recognizing them with this great honor.
2007 USTGS Hall of Fame Awards Recipients 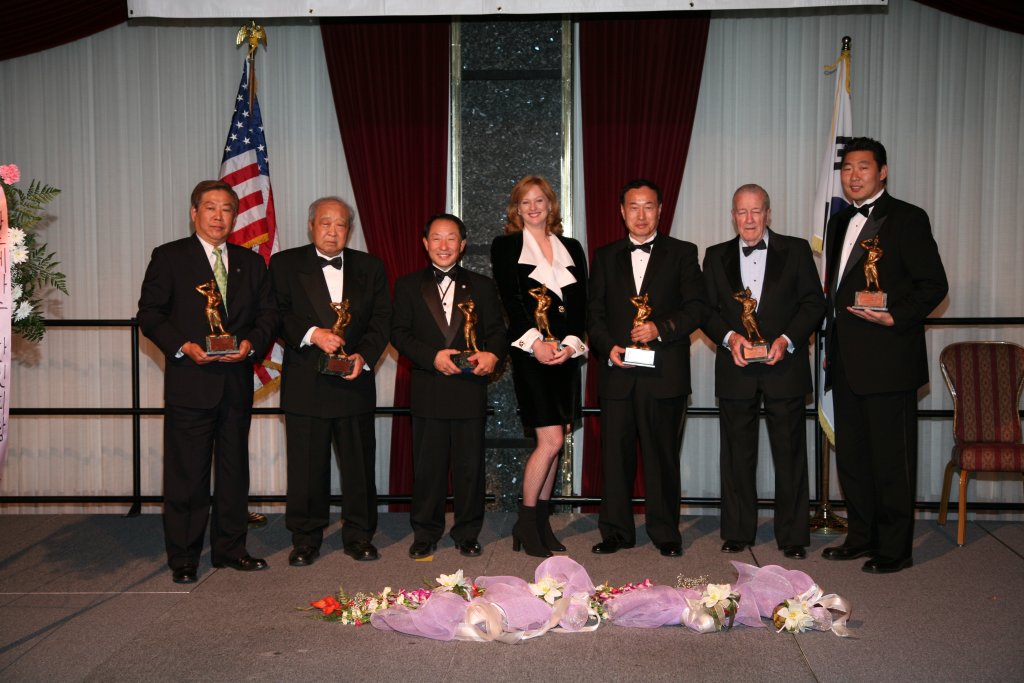 (Left to Right) GM Byung Jik Ro (represented by GM Yong Kil Kim), GM Tae Hong Choi, GM Joon Pyo Choi, Master Dana Hee,
​GM Dr. He Young Kim, Mr. Josiah Henson, Master Jimmy Kim
Highlights from Our 2nd Annual Event
Founding Pioneer Award to 1st Generation GM Byung Jik Ro
​​True to the ideal of honoring Taekwondo’s first and finest in the modern age, the Founding Pioneer Award was presented to first generation Taekwondo Song Moo Kwan founder Supreme Grandmaster Byung Jik Ro (above left), and accepted on his behalf by Grandmaster Yong Kil Kim (above right). Supreme Grandmaster Byung Jik Ro opened the Kaesung Dojang in the Kwan Duk Jung archery school in 1944. He has also served as Tae Kwon Do instructor for Seoul University, Dan Gook University, Seoul Oriental Acupuncture College and several other institutions. As a continuation of his training and teaching, Supreme Grandmaster Ro continued to develop exclusive techniques of his own, combining them with what he had learned into what became Tae Kwon Do Song Moo Kwan. In 1966-67 he contributed to the community as president of the Korea Taekwondo Association. The honorable Supreme Grandmaster Byung Jik Ro made every attempt to receieve the award himself this year, yet he was unable to make the journey from his home in Minnesota to Las Vegas for the event after all. Fortunately, his senior student, Grandmaster Yong Kil Kim, came from Los Angeles to accept the award on behalf of his Master.

1988 Olympic Gold Medalists Reunite
Male Competitor of the Year was awarded to 1988 United States Olympic Gold Medalist Master Jimmy Kim, who competed successfully in the heavyweight division. His lengthy resume of Taekwondo achievements includes; Senior California State Champion from 1983 to 1988, Senior US National Champion in 1985, 1987 and 1988, 1985 World Games Gold, 1987 Pan American Games Gold, 1987 World Championship Silver, 1987 World Cup Gold. Master Kim is also a Doctor of Chiropractic and a graduate of UC Berkeley. He began his training with Grandmaster Chan-Yong Kim at the tender age of 2 and 1/2 years and continues to contribute to the Taekwondo community today by teaching and training competitors at his Taekwondo Center in Laguna Niguel, California.

Female Competitor of the Year
Female Competitor of the Year winner Master Dana Hee is proof positive of the transformational effects Taekwondo can have on life. Master Hee overcame many personal challenges early in her life by making the decision to strive to achieve her full potential – a decision that took her to the Olympics and a Gold Medal at the 1988 Olympic Games in Seoul, Korea. Master Hee now inspires others through various speaking engagements, motivating others to reach for success in their endeavors. She has also enjoyed a successful modeling and acting career. With her strong martial arts background, it is no surprise that she has become one of the movie industry’s top stunt women. Congratulations competitors!

Coach of the Year Award goes to the Coach of Champions
Coach of the Year recipient for 2007 is Grandmaster Joon Pyo Choi, who has an extensive résumé that spans not only Taekwondo, but many interests. An accomplished musician and accupuncture specialist, Grandmaster Choi began teaching martial arts in 1963 and began a career as a competitor in 1967, earning numerous awards and accolades along the way. In 1971, he landed in America with one suitcase holding two Tae Kwon Do uniforms, $25 in cash, and his beloved Korean musical instrument, the Ga Ya Geum, Da Geum. Over the years in America, his precise and impressive Taekwondo skills have enabled Grandmaster Choi to receive countless “Best Demonstration” awards from such prestigious events as the Canadian Open, the All American Open at Madison Square Garden, as well as from the world renowned Smithsonian Institute. His skill as a trainer of champions has been no less impressive. Grandmaster Joon Pyo Choi has produced several national and international champions in the United States over the course of his career. He has remained involved in the Taekwondo community in leadership roles as well. Thank you Grandmaster Choi for your contributions.

A True Ambassador to Taekwondo
Ambassador of Taekwondo winner and retired US Navy pilot Captain Josiah Henson has a long, honorable association with sports and fitness. Mr. Henson had a very successful collegiate career at the Naval Academy where he captained the wrestling team in his senior year. He trained for the 1952 Olympic Games while a military member of the Naval Academy Faculty, 1950-1952. He won the Olympic Trials at 136.5 lbs. and eventually won an Olympic bronze medal in 1952 at Helsinki, Finland. He has been an official participant in every Summer Olympic Games since 1952 (except boycotted 1980 Moscow Games). In fact, he has served in offical capacities at the Pan America games, the US Olympic Committee and other athletic organizations as well. In 1969 he began BRUTE, a company that makes wrestling equipment and clothing and which today is probably the most recognized name in wrestling clothing. Mr. Henson remains very active in many sports-related capacities to this day. He is currently Vice-President of the World Taekwondo Federation and has also served as President of the Amateur Athletic Union (AAU).

Literary Achievement Award to Han Mu Do Founder
Literary Achievement Award recipient Dr. He-Young Kimm has accumulated vast resevoirs of knowledge over the last forty years through various grandmasters and personal experiences, from which Dr. Kimm has created a new system of Korean martial art called Han Mu Do. Over the course of his studies Dr. Kimm’s interest in the historical and philosophical aspects of Korean Martial Arts grew, as did his disappointment in the relative lack of quality books on these subjects. Thus, he began to write his own. A critically acclaimed book of parables, containing beautiful photographs Dr. Kimm shot himself, contains the biographies and the teachings of famous Buddhist figures in ancient Korea. After publishing the books Kuk Sool and Philosophy of Masters, Dr. Kimm went on to write and publish two books on Hapkido, based on the teachings of Grandmaster Ji, Han Jae, founder of Modern Hapkido. Later works include Tae Kwon Do Self-Defense, an instructional manual for Tae Kwon Do instructors, and Han Mu Do: Korean Martial Arts, a guide to the martial art that he created. In addition, Most recently, Dr. Kimm has been compiling information and conducting interviews for his next book, The History of Korean Martial Arts. The book will document the history of martial arts of ancient Korea.

Ambassador of Taekwondo Award
Grandmaster Roy Kurban is the 2010 recipient of the Ambassador of Taekwondo Award. GM Kurban began Taekwondo training in 1965 and by 1968, he was awarded 1st Degree Black Belt in Taekwondo in Dallas, Texas. In 1970-1971, hile stationed with the US 8th Army in Seoul, Korea, GM Kurban trained under GM Won Chik Park. In 1973, GM Kurban established his martial arts school, American Black Belt Academy, in Arlington, TX. During the 1970s he was a formidable competitor and was ranked among the top 7 fighters during that era, by Black Belt Magazine. Also during this time, he distinguished himself as a peace officer instructor in the North Texas area. He established an accredited Taekwondo course for the Physical Education Department of the University of Texas Arlington in 1982, which is still recognized today. GM Kurban served as a Justice of the Peace from 1991-2006 in North Texas. He remains active in the martial arts community by conducting seminars, as well as serving as Vice Chairman of the USTGS Taekwondo Museum Building Committee.

Peace Award
GM Jung Ohm Hwang is the 2010 winner of the Peace Award. GM Hwang was born in 1958 and began martial arts training at age 7 in Sunsan, Kyun Sang Bok Do. After competing on some Judo teams during middle school, he began Olympic training in earnest. In 1978, he earned a full scholarship to Yong In University. At age 18, he won a position on the Korean National Judo Team and entered the Olympic Training Center to train for the 1980 Olympics, but these Moscow Games were boycotted. In 1984, GM Hwang won the Silver Medal in Judo at the Los Angeles Olympic Games. He and his family emigrated to the US, where he opened his first school in Tennessee in 1988. He served as an International Referee at the 1988 Olympic Games in Seoul. In 1990, he earned his Master’s Degree in Education at the University of Tennessee. In 2007, he participated in the North Korean Goodwill Tour with GM Jung, President of the Taekwondo Times. They invited the North Korean National Taekwondo Demo Team on a tour of the United States. GM Hwang has contributed to the community by raising funds and donating time for many charitable causes. We recognize his wonderful achievements to humanity.

Coach of the Year Award
GM Yeon Hwan Park is the 2010 winner of the Coach of the Year Award. GM Park trained in Korea, and was an undefeated Korean national champion of Taekwondo from 1971 to 1975 He moved to the African nation Lesotho where for two years he trained their secret service and special police. In 1980, he emigrated to the US. In 1988 at the Seoul Olympics, he led the USA Women’s Team to first place and the USA Men’s Team to a second place finish. GM Park has served as president of the New York State Taekwondo Association and the secretary-general of the United States Tae Kwon Do Union. He is the former vice president of the United States Tae Kwon Do Union and the publisher of USA Taekwondo Review. Park is a professor and lecturer and has co-authored Black Belt Tae Kwon Do and Tae Kwon Do, Third Edition, as well as 12 other books on the martial art. His latest book, Tae Kwon Do, My Life and Philosophy was published in 2009. In 2008 he was elected President of the US TKD Union. We honor GM Park for all of his contributions to Taekwondo.
​
Competitor of the Year Award
Master Han Won Lee is the 2010 recipient of the Competitor of the Year Award. Master Lee was born in Korea in 1962. He began Taekwondo at age 14 under USTU Past President Hwa Chong in Ann Arbor, Michigan. Master Lee was a successful competitor for many years. In 1986, he was awarded USTU Male Athlete of the Year. He was on the USA National Team for eight years and competed in the 1988 and 1992 Olympic Games. He won a Bronze Medal in the 1988 Olympic Games and was Team Captain in the 1992 Olympic Games. Master Lee has served as a WTF International Referee since 1990. He has been coaching since 1993, when he assumed the position of US National Coach at the Olympic Training Center in Colorado Springs, Colorado. In 1996, he chose to open a martial arts school in Castle Rock, Colorado. In 2000, he served as Official USA TKD Coach for the 2000 Olympic Games. Presently, he concentrates his time in the local martial arts community. Congratulations Master Lee.